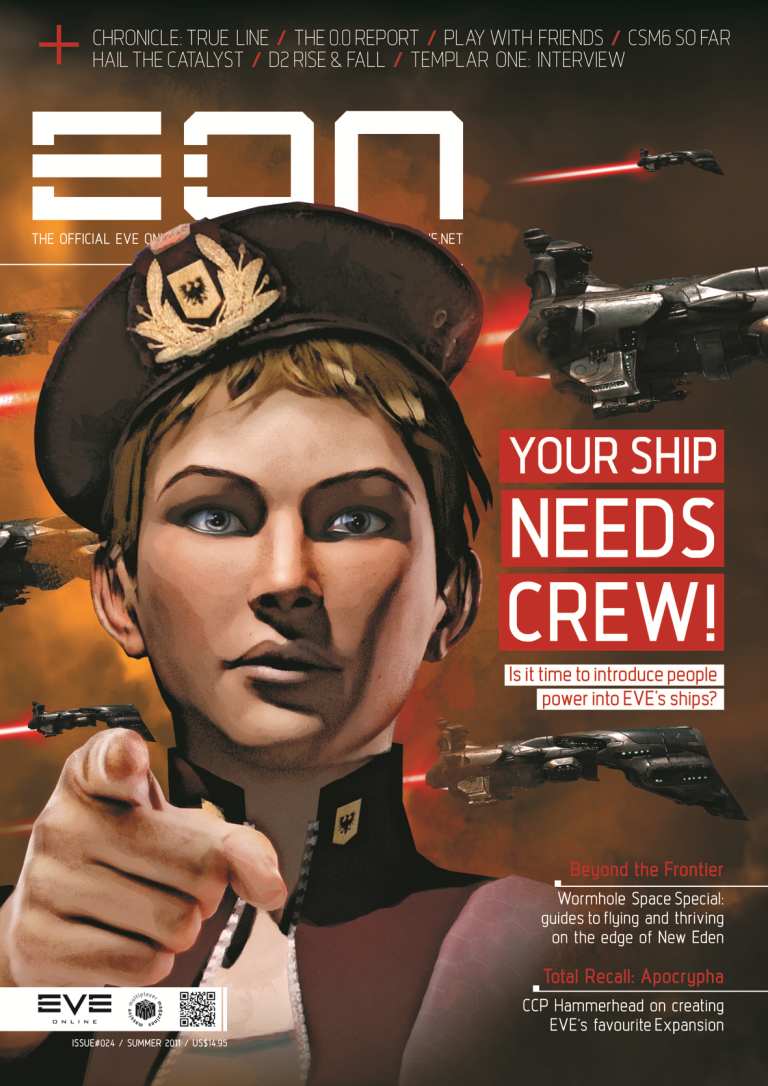 A new issue of the EON magazine is now available.
EVE-pirate is and has been a fan of EON from the start

CREW CONTROL
Ship crews have long been on the wish-list for players and developers
alike, yet it has taken CCP years just to release the numbers. We look
at how ideas for ship crews have been put forward, ask what the issues
have been that have stopped crews being a feature of EVE's combat
mechanic and ponder how, if ever, New Eden's silent NPC majority might
have a say as to how battles are played out in the future.

BACK THROUGH THE WORMHOLE
We go back to the dark days of bank bail-outs to see how impending
financial armageddon urged CCP to take a fearless attitude to EVE
expansions. The result was fan-favourite Apocrypha, the expansion that
opened EVE to wormholes, the persistent mystery and threat of the
Sleepers, and the future promise of Tech-III ships.

BEYOND THE BEYOND
Continuing the wormhole theme this issue, Lex Starwalker brings us a
guide to living in w-space, we have the second instalment of Pottsey's
exhaustive compendium of Sleeper theories and in our regular Tesflight
round-up, Kirith Kodachi gathers together some of New Eden's most
successful wormholers, who reveal the ships and fittings they wouldn't
leave home without.

THE WRITE STUFF
With a third EVE novel being readied for the autumn, we tackle
author Tony Gonzales to talk about his career as an EVE fan and a CCP
Developer. We ask how The Empyrean Age came about and how Templar One
will hopefully lead us into a universe where EVE capsuleer and DUST
mercenary must share the spoils of war.

PLUS
All you need to know about the Guristas
In Crowd with CCP Sreegs and CCP Explorer
Profiles of Red vs Blue, Phoenix Propulsion Labs and Masuat'aa Matari
The rise and fall of Dusk and Dawn
How to get your mates playing and loving EVE
CSM6 - the first weeks in office
* The 0.0 Report…and all the latest news and events