Skip to content
Hey everyone, I just wanted to take a second and do a bit of cross-promotion here. I was recently approached by Eve Radio and asked if I would like to be interviewed. Apparently one of their DJ's stumbled on to Ander's site here and really enjoyed the stories I post about our corp and our antics.

So I agreed to the interview and it will air this Thursday January 31th at 5pm through 8pm Pacific Standard time. That's 01:00 through 04:00 Eve time.

I wanted to thank DJ Lilin for the opportunity to be interviewed, and also thank Ander for providing a forum for all of us here.

Also, DJ Lilin runs a contest during every show, where you have to track him down and kill him and you will get the bounty on his head. Generally he does it somewhere out in Metropolis. He usually flies a Rifter, and the only real rule to the contest is, don't pod him please. He said the bounty he pays out runs anywhere from 50mil to 200mil and sometimes more than that even. Not bad considering the hardest part would be tracking him down.

If you miss the interview, I will be getting a copy of it from him and I will link it up so you can hear it.

I am also going to be working on a new story in the coming week or so. It won't be a major saga like the Crimson affair was, this one will be a bunch of small instances, some of which are quite amusing as usual. I will also touch on the love we get when we dec a CVA friendly corp and how these corps leave CVA just to dec us and how they promise to shut us down, but then hire mercs to help kill us. Huh? Gotta love those anti-pirates, right?

So just hang in there and pop this game into your Atari system and have fun! 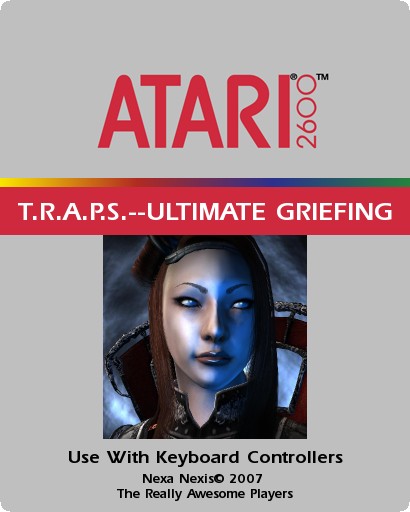 FIRST!!!
Dude, seriously, not cool teasing us like that...
-come to work
-make coffe
-turn computer on and curse monday
-log in
-run firefox
WHOOOOA Nexas' pic
...
damn.
You see? You know what i mean?

Great Comment. LOL
thx for letting us know about the interview but alas i do not think i will be able to listen in,the time is about 2 in the morning for me any chance of getting a copy or posting a link to it somtime,im unsure if eve-radio already offer this service or not,i lost interst in using eve-radio since most of what was on thier were songs that were poor quality

anyway thx again for the heads up nexa and i hope to "hear" you soon
Yes, the time thing can be troublesome, 2 a.m. sounds scarry ;p still I'll try to be there, we'll see if coffee will do it's job

I am a sad panda
Hey guys, Nexa is going to host both the interview and my show, so if you want to download both of them at a later time, you can.
Going on now, hope you guys listen in

is there a recording then? be interesting to here