The last 48 hours have been absolutely amazing. As you can see in my other thread, the bad apples at CCP are finally being forced to admit to their shady dealings. Kugutsumen.com and the scandal as a whole has been covered in a wide variety of media outlets from WarCry to the Escapist, and three times on Slashdot alone, and the site is averaging 100 people online. kieron's attempt at censoring me has largely served to further fuel the flames and the wall of silence kieron and his ISD are enforcing finally seems to be breaking. The Sniggs & Goons mustered a 100 man suicide fleet with ships all named "Kugutsumen's Revenge". I'm nearly in tears.

CCP is, however, still trying to perform damage control, by giving us as little as they think they can possibly get away with. To give examples: T20 only admitted to 6 of the 10 BPOs that I listed. Helmar's blog was nothing more than a wordy version of kieron's original investigation closing thread. kieron and his ISD cronies are still large and in charge on the forums and not allowing us to get the word out to the players. Just last night, a GM was scanned out while scouting GoonSwarm POSs around the time the Band of Developers announced their invasion:

We've made way, but we're not yet at our destination. What, you ask is that? There's a large division in what everyone thinks should happen. One one hand, we have the people who think this is getting way out of hand and is harming the game, and on the other we have people calling for mass bannings of the entire BoD alliance, with lots of people inbetween. But it's important to be reasonable here. What needs to happen is the following:

- The willynilly censorship performed by kieron and the ISD has to stop. It is neither fair nor good for the game that things like this are attempted suppressed.
- The ban on discussion of GM affairs must be removed. While I don't and never have believed that CCP as a whole is rotten or corrupt, it's now completely obvious to every EVE player that some parts of CCP are, and our inability to discuss these things quite evidently hinders the fairness of the game.
- The Internal Affairs touted by Helmar must be transparent and willing to be open to the playerbase. The concern here is not over a few T2 Ammo BPOs and a Sabre BPO that, while financially very useful, are not important in the greater scheme of things. The concern is that the playerbase's trust in CCP has been harshly damaged, and only tangible reassurance will help to heal it - no amount of vague posts from kieron or hitting of the Delete Post button from the ISD will do that.

But the rotten BPOs have been removed, an Internal Affairs has been created, and the community appreciates these things. I ask that people stop their requests for unreasonable things such as "BoB should be disbanded", "T20 should be fired" and so forth, because we have gotten this far not just through our justified outrage, but by being unified in our outrage, and we need to show CCP that not only can the players be worked with, but we can be worked with towards reasonable goals that are good for the game - because we can and we do.

As for my still banned accounts, Lead GM Grimmi cited the following reasons:

Lead GM Grimmi here. I have been investigating the bans that were placed on your accounts recently. This is a complicated issue and I sincerely apologize for the delay in getting back to you on all this. Now, the accounts were banned, amongst other things, due to serious concerns regarding the alleged method used to collect the information you have posted on your forums. Hacking is a very serious matter and such issues cannot be taken lightly. However, our investigations have not turned up concrete proof of such criminal behavior and there is no reason for us to take action against you for that. Regarding the other TOS articles cited in the ban mail you got;


16. You may not engage in any activity that increases the difficulty and/or expense of CCP in maintaining the EVE Online client, server, web site or other services for the benefit and enjoyment of all its users.

18. You may not communicate, post or publicize any subscriber's personal information within the EVE Online game world or website.


It can be said with some fairness that the posts you made have caused quite the uproar and created an atmosphere that makes all our lives that much more harder. CCP does not condone cheating, for sure, but dealing with matters such as this one is not made any easier with all the ruckus.

Posting RL personal information about players is in no way acceptable, no matter what reasons may compel you to do so. This sort of thing can have consequences far beyond any effects you may be looking for and should not be done at all, ever.

Concerns about CCP employee misconduct should be sent to us for investigation. We did not receive any mails from you regarding the issues in question here.

In our view, you have clearly violated the above articles and we will therefore not be removing the bans on your accounts. They will remain permanently banned.

Lead GM Grimmi
EVE Online Customer Support
Essentially, I have been banned for bringing their corruption to light, and they are very open about that. That said: if what it takes to get CCP to clean up their dirty laundry is five of my paying accounts banned, then that's a sacrifice I am willing to make. 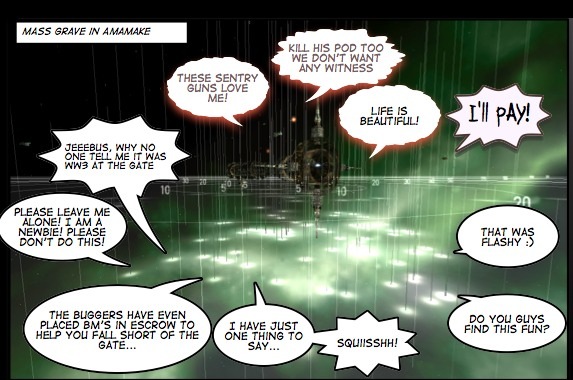 If you like my comic strips and want me to be more productive send me some isk. On the other hand, you can also pay me to be less productive.

Cleared for publication by: Ander
Yes this is the same gankfest I wrote about.

Comments, suggestions and critics are welcomed.