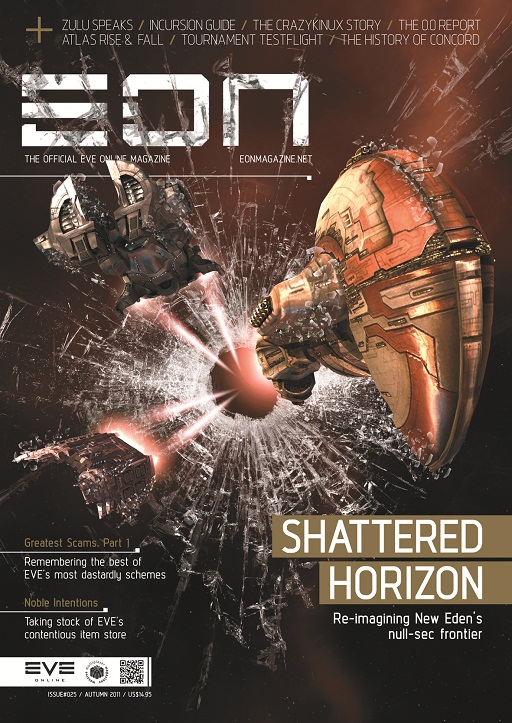 SHATTERED HORIZONS
Dominion was the last time the foundations of null-sec were reformed and, while intentions were good, two years on things haven't turned out quite as hoped. Now CCP is preparing to set things right again, only this time with long-term vision that could impact not just 0.0 space, but every part of EVE Online. Massively.com 's Brendan Drain explores the potential for EVE's long-term future and sees reason to be quietly optimistic.

EVE'S GREATEST SCAMS - PART 1
If you weren't tempted into EVE by the boasts of an impending expansion, it may have been due to the exploits of the players - those that have stolen and scammed their way to become New Eden's most notorious characters. From Nightfreeze to Cally and from Remedial to Istvaan Shogaatsu, we look at the 10 biggest thefts and most notorious scams that dominated EVE's early years.

NOBLE INTENTIONS
The Noble Exchange has probably been the most contentious addition to EVE since the game first went live, providing a means for characters to dress themselves up in specialist virtual clothing at a premium non-game-breaking price. We fired off a load of questions to CCP to see how business has been going and ask what's in store for the next iteration of NeX as a new expansion nears.

UNDERSTANDING INCURSIONS
Six months on since they were introduced to New Eden, we evaluate and explore EVE's most recent gameplay addition, with a guide to joining and emerging victorious against the Sansha hordes. Also in our expanded 15-page Knowledge Base Guide section we dig behind the back story to bring you the definitive history of CONCORD.

PLUS
In Crowd with CCP Zulu & CCP Tallest
0utbreak, Vuk Lau and Colossus Technologies profiled
The latest CSM and 0.0 Report
The CrazyKinux Story
All you need to know about hiring mercenaries
Alliance Tournament Testflight
The Rise & Fall of ATLAS
Apocalypse under the spotlight
Who's top of the BattleClinic Rankings?

I am glad to read about such wonderful blog.