Thats Right! Today is Mother's Day. I for one got a Garfield Card for my mother, as for a present, there was none. Last year I gave her chocolate and she yelled at me (she is overwheight) and she is allergic to flowers. So if you have forgotton, at least give your mother a call!

Ahh, I must say again, I love the Vexor. I came back this weekend from 0.0 to pirate once again. After Insta'ing to a gate, i jump through. As i jump through, a member of the GUARD alliance jumps through from other side. On the other side of the gate, there is his friend, also in GUARD, in a Ishkur with blasters. As soon as i get into system, I immediately start heading back to the gate so that i can jump if i get in trouble. The Ishkur locks and attacks me. By the time he gets in web range, i am just about in jumping range. The other GUARD person jumps back into system. He decloaks and attacks me, he is in a rax with t2 heavy electrons. I then jump back through the gate i came from. After their timer goes away, they come to me. Here, we play some undocking games for a little while so i dock for a couple min. I get intel from a friend in system that the rax has left the station, so i take the chance. I attack the ishkur in my vex. He has a nice tank, he goes down much slower then expected. His rax buddy warps back in as he is approaching structure. I am now getting hit by both, and i am in about 2/3 armor by the time the Ishkur blows to peices. This is the point where i ask myself to fight or to wait and dock. Who am I kidding? I'm insanely blood thirsty. I go for him of course! We are both scramed and webbed. Both of our tanks are dying, closer and closer to both of our ships come to the verge of exploding. POP! who is the victor? I am. I leave the bout with 36% structure. The loot was nice... Ishkur dropped a SS energized explosive, light t2 drones, void ammo, and t2 rep. The rax dropped t1 drones (i go through med drones like... milk? because i gate gank a lot with my vex/thorax's) heavy electron ii's, void m charges. Thers prob more, but no one prob cares, hell i dont really. If i was only going for isk I'd whore missions all day.


After the fight we said good fight, and they left. VICTORY!

Exactly what the title says. I find five people ratting together. bb, thorax, cormorant, punisher, and Trisian. I decide to pounce on them. What ship choice do you think I choose? Thats right, a thorax (all my vexors have been destroyed through various engagements, but hell i use cruisers as throwaway items and dont really care if/when they pop). I found them through scanner at a belt hitting npc's and I warp in to that belt. I Land off by about 40km and mwd towards them. For some dumb reason i attack thorax first. Soon after, I am jammed by BB. At this momment i hit armor, and i am holding down control and clicking the bb very quickly. When i get a lock onto it (about 10 seconds later or so) i light it up and send drones at it. Pop, first victim. i return to thorax and send drones to the dessy. At this point i crash (didnt have problem fixed yet. I was doing test fixes at this momment). I am SO mad, am i going to get podded because of a stupid problem on my end? No, i come in and i still have some armor left. I take down the thorax and hit last two frigs and podded one person through the engagement. Tank held, barely; I got out with about 10% left

. No yelling or anything, chatted and gave em advice afterwards.

....When your hard drive fries on you? This just happened to me today, but luckily i have an old cache on a usb 1 gig drive

. It just sucks when computers don't work the way you want them too

. Feel free to expose some shitty computer momments in the comments. That is all. I wish i had some nice pirating story to say, but I do not. Just have a bunch of kills that dont deserve a post about.

As many of you know already, since the Blood patch, servers have been "off" at best. Seemingly random spikes occur, which aftwards breaks the traffic system and require a server reboot to temporarily fix the problem. Well, today i was going round trying to find this thorax. When i finally get to him, launch drones, lock him, scram and approach him, the server goes berserk. I attempt to activate modules with no success. By the time my armor got to about 40% is when my hardeners and rep turned on. To my surprise when the server kicks back into gear he is in low structure and i am popped. Then i sit in my ship continually orbiting him, with my kill maill, and a minute or so later i finally get into my pod and warp off. Any similar occurences feel free to comment below


I would just recommend everyone to not use their prized ships and mods at this time.

Yesterday, as I usally do, I make my rounds around the surrounding unformal territory owned by the newly created 9th Fleet Alliance. I receive i report, Snigg in xyz system. On scanner, two interceptor class vessels, and one thorax-class cruiser. I quickly make my way there, hastely creating a gang with friendly pilots in the area. No sooner then this, a friendly vexor mining was attacked and requested help as soon as possible. Myself, just in time had just entered the system in a friend in a claw. We jump into the belt, and I engage the thorax with my vexor. After podding the other vexor pilot who was mining, the interceptors turn their weapons to me. Time is slipping by, the thorax has at least one med nos on me, and my cap is draining from the med armor rep I am using. help arrives, the crow i am with comes. the thorax's tank is broken and he is in stucture. Pop, an explosion erupts from the thorax as i hit about 2% armor. Quickly i change targets to claw. He attemps to run, but hits an asteroid (i think because he is moving so slow and for no reason is in web range) and i web and scram him. drones sent and he goes down quickly. The last interceptor runs off. Soon after, one of the snigg logged off in their pod at a quickly made SS. We scan it out and give him a quick ride home. Loot sales and bounty from podded member went to the vexor for his loss.


Good fight to the snigg involved. Hope to see you around again as people who know how to play is hard to come by

Wow, hasn't it been a while! Reason i was gone was that I did not have any internet access at my computer, reasons i will not go into

. Since i've gotton back i went on a killing spree. So many kills, just jumbled around. The one i will remember is killing a Vindicator (faction megathron). This person wasnt missioning, killing people, npc'ing or anything like that. He would continually enter our systems and stay on a gate, and had a mwd. We had to set a trap. We rigged an outlaw with an apoc i think it was, and since the vindi was using blasters, he had to mwd towards the outlaw, off the gate. When the vindi attack we jumped, warped to him and proceeded to web, scram, damped, and kill him. The apoc was shot down from the vindi fire, but the modules recovered covered the loss. faction BS number three killed by "9th fleet".

I have been flying around a lot in a vexor lately. It has served me so well, that it has killed probably 200 times its value in ships

. My personal carrier is on its way to production. If you would like to sell some bpc's for cap comps contact me. Expect to hear from me a lot again

I hate the invul timer. In the image below you will see how long the person was undocking from a station, only to redock. Twenty seconds. It may not seem like a long time to some people, but twenty seconds is a Long time. Lemme throw some facts down. You can use a med rep ii twice in 24 seconds withough skill bonus, an ion blaster cannon ii fires every 6.75 seconds without skill bonus, an e500 vamp will take 230 cap, two cap booster 800 charges can be injected into your cap, you can possibly be jammed (every 20 seconds).


More works by me to come in another week. And now im back off to study, write a couple reports, and seduce my teachers for better grades. Hey, ones like 22 and pretty good lookin too 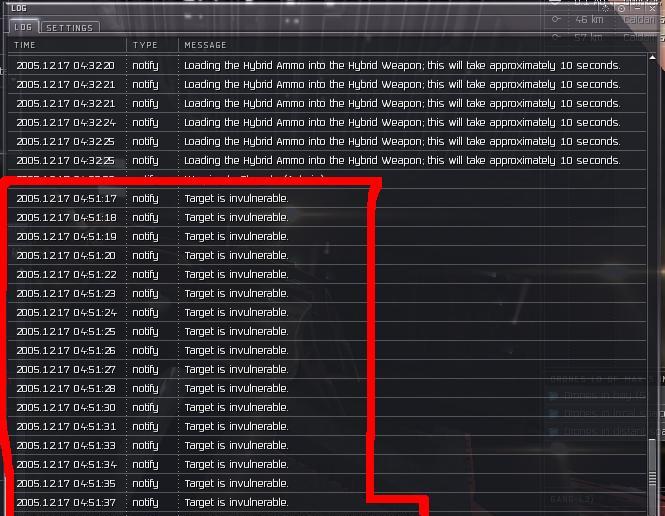 Yes, the server be a-up again. But, was ccp ready for rmr? you decide.


I say no.
Breaking news. This min. the patch has been released


Hopefully they fixed all the damn bugs.

Edit2: someone was nice enough to put in mirrors in comments if the official one blows now.

Edit3: TQ is on starting up mode. Hopefully soon.

I think most of you will agree with me on this one, if it is real of course.
A couple days ago, I was coming back from 0.0 with an Exeq full of nice booty. I'm coming back at 1 am, no one is really ever on or camping. Map shows no kills in the past hour. I happen to run upon a gate camp of Just bs's. I Think I'm fine, but oh am I wrong. Each BS had like three sensor booster ii's or some ammount. I'm locked within a second and popped. About 400 million isk lost, and none of the great stuff popped like a local expander, or 8 1600 tungs, or the faction hardener, tracking comp, etc. So the killers easily got at least 200 million of booty off of my kill. Very displeasing night.

. So next time I will take a few trips so such a loss does not occur. Lesson re-learned

.
As Many people have probably noticed, Eve is lagging to hell and back. If you were one of the unfortunate ones to have lost their ship(s) like me

due to lag you cannot even petition yet. CCP is moving their offices and their e-mail stuff is down (which includes other petitions) and should be back on Monday. So don't spam the official forums with "DUDE WTF?!1 YOU SAID OTHER PETITIONS WERE WORKING AGAIN!!1"

Edit: And no, it wasn't to rats

Yes, it's true. Thats what I'm doing right at this momment. I'm in some misc place in syndicate killing evil rat megathrons for some cash and sec. This weekend I'll probably be back in low sec empire to kill people. It's just been so slow lately, and it seems The Misphits have lost the urge to come at us. Most unfortunate

. In other news, Lara CEO of The Misphits was podded in the system 2x-pqg of syndicate by unkown forces. I bid a good job, and well done to those pilots. And I just can't believe he was podded. He is always the first to run at the first sign of trouble... must have caught him off guard.